The Governing Council of the Bank of Canada raised its target for the overnight policy rate by 75 basis points today to 3.25% and signalled that the policy rate would rise further. The Bank is also continuing its policy of quantitative tightening (QT), reducing its holdings of Government of Canada bonds, which puts additional upward pressure on longer-term interest rates.

While some Bay Street analysts believed this would be the last tightening move this cycle, the central bank’s press release has dissuaded them of this notion. There has been a misconception regarding the so-called neutral range for the overnight policy rate. With inflation at 2%, the Bank of Canada economists estimated some time ago that the neutral range for the policy rate was 2%-to-3%, leading some to believe that the Bank would only need to raise their policy target to just above 3%. However, the neutral range is considerably higher, with overall inflation at 7.6% and core inflation measures rising to 5.0%-to-5.5%. In other words, 3.25% is no longer sufficiently restrictive to temper domestic demand to levels consistent with the 2% inflation target.

As the Bank points out in today’s statement, though Q2 GDP growth in Canada was slower than expected at 3.3%, domestic demand indicators were robust – “consumption grew by about 9.5%, and business investment was up by close to 12%. With higher mortgage rates, the housing market is pulling back as anticipated, following unsustainable growth during the pandemic.”

Wage rates continue to rise, and labour markets are exceptionally tight, with job vacancies at record levels. We will know more on the labour front with the release of the August jobs report this Friday. But the Bank is concerned that rising inflation expectations risk embedding wage and price gains. To forestall this, the policy interest rate will need to rise further.

Traders are now betting that another 50-bps rate hike is likely when the Governing Council meets again on October 25th. There is another meeting this year on December 6th. I expect the policy rate to end the year at 4%. 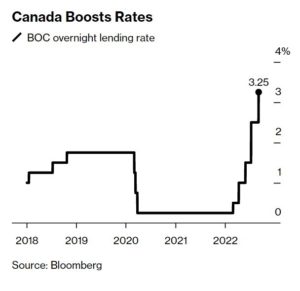 The implications of today’s Bank of Canada action are considerable for the housing market. The prime rate will now quickly rise to 5.45%, increasing the variable mortgage interest rate another 75 bps, which will likely take the qualifying rate to roughly 7%.

Fixed mortgage rates, tied to the 5-year government of Canada bond yield, will also rise, but not nearly as much. The 5-year yield has reversed some of its immediate post-announcement spike and remains at about 3.27% (see charts below). Expectations of an economic slowdown have muted the impact of higher short-term interest rates on longer-term bond yields. This inversion of the yield curve is consistent with the expectation of a mild recession next year. It is noteworthy that the Bank omitted the usual comment on a soft landing in the economy in today’s press release. Bank economists realize that the price paid for inflation control might well be at least a mild recession.

Another implication of today’s policy rate hike is the prospect of fixed-payment variable-rate mortgages taken at the meagre yields of 2021 and 2022, hitting their trigger rate. There is a good deal of uncertainty around how many these will be, as the terms vary from loan to loan, but it is another factor that will overhang the economy in the next year.

We maintain the view that the economy will slow considerably in the second half of this year and through much of 2023. The Bank of Canada will hold the target policy rate at its ultimate high point– at least one or two hikes away– through much of 2023, if not beyond. A return to 2% inflation will not occur until at least 2024, and (as Governor Macklem says) the Bank’s job is not finished until then. 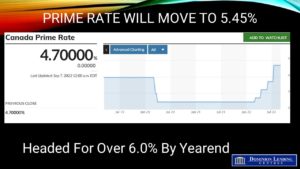 Please let me know if you have any questions,
Mark