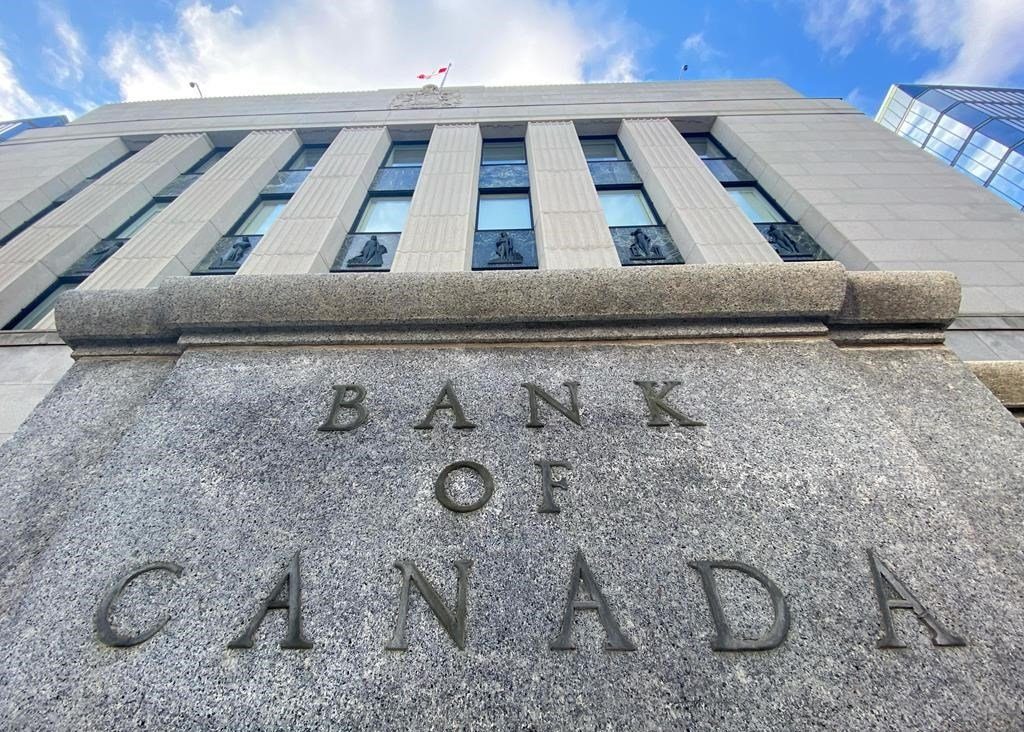 The Bank of Canada, this morning, released its January Monetary Policy Report (MPR), showing they expect to keep overnight interest rates at its “effective lower bound” of 0.25% until 2023 (see chart below). To reinforce this commitment and keep interest rates low across the yield curve, the Bank will continue its Quantitative Easing (QE) program–buying $4 billion of Government of Canada bonds every week until the recovery is well underway. The central bank indicated it could pare purchases once the recovery regains its footing.

According to the Bank’s press release, “The Governing Council will hold the policy interest rate at the effective lower bound until economic slack is absorbed so that the 2 percent inflation target is sustainably achieved. In our projection, this does not happen until into 2023.” Officials are apparently optimistic about the economy’s prospects once the vaccine is sufficiently distributed and injected. There is no indication that they are planning additional measures to ease monetary policy.

This is particularly noteworthy for two reasons: 1) some economists had been speculating that the Bank would lower the overnight rate by 10-to-15 basis points to help mitigate the impact of continued and broadening lockdowns; and, 2) others thought the early development of the vaccine would trigger sufficient growth to warrant a rate hike in 2022. In the Bank’s current view, neither is likely to be the case. Why mess with a minute cut in already record-low interest rates when mortgage lending is still strong? The slow rollout of the vaccine and the mounting second wave of cases assure weak economic activity in Canada at least until the second half of this year.

As well, inflation remains surprisingly muted. In a separate release today, Stats Canada revealed that price pressures in Canada unexpectedly slowed in December as the country endured a new wave of lockdowns. After climbing to the highest since the pandemic in November, the latest reading shows price pressures are still well below the Bank of Canada’s 2% target. That’s consistent with the view from policymakers that inflation will remain subdued for some time.

The pandemic’s second wave has hit Canada very hard, and the vaccine rollout has been disappointing (see chart below). Today’s MPR predicts that the economy will contract in the first quarter of this year. Economic weakness could be exacerbated by the Canadian dollar’s strength, which moved to above 79 cents US following today’s BoC announcement. Ten-year yields edged up modestly as well.

For the year as a whole, economic growth is expected to be around 4% in 2021, compared to a contraction of -5.5% last year. As the inoculated population grows, the Bank forecasts an acceleration in growth to just under 5% in 2022 and a more-normal 2.5% in 2023. According to the January MPR, “The medium-term outlook is stronger than in the October Report because of vaccines’ positive effects, greater fiscal stimulus, stronger foreign demand and higher commodity prices. Meanwhile, potential output has also been revised up, reflecting an improved projection for business investment and less scarring effects on businesses and workers. There is considerable uncertainty around the medium-term outlook for GDP and the path for potential output. Thus, while the output gap is expected to close in 2023, the timing is particularly uncertain.”

Concerning housing activity, the report said, “Demand for housing has continued to show resilience, despite increasing case numbers and tightening restrictions. Housing activity should remain elevated into the start of 2021, supported by low borrowing rates and resilient disposable incomes. Changes in homebuyers’ preferences have also played a role. For example, price growth has been strongest for single-family homes and in areas outside city centers,” shown in the chart below.

Canadian employment fell 62,600 last month, a bit weaker than expected, following seven months of recovery (see chart below). The rapid rise in COVID cases and the ensuing lockdown measures in many key regions caused the net loss in jobs in the mid-December survey.  Especially hard hit were workers at restaurants and hotels who suffered a hefty 56,700 employment loss.

The jobless rate rose a tick to 8.6%–well below the peak of 13.7% in April–but still three percentage points above its pre-pandemic level.

However, there were some bright spots as several sectors churned out small gains (see second chart below).  Among them were finance, insurance and real estate, as well as scientific and tech services. Manufacturing rose 15,400, and public administration reported solid gains.

On a positive note, full-time jobs actually rose 36,500, and average wages pushed back up and are now 5.6% higher than one year ago. This outsized gain, in part, reflects the loss in so many low-wage jobs.

Part-time jobs were down sharply in December, led by losses among workers aged 24 and under and those aged 55 and older. Also, the number of self-employed workers fell by 62,000, its lowest point since the pandemic began.

The December loss of jobs left employment down 571,600 (or -3.0%) from year-ago levels, the deepest annual decline since 1982–but far better than the April reading of -15% y/y. The 2020 job loss in Canada of -3.0% is also a relatively mild downturn compared to today’s US job market release for December, which reported a -6.2% y/y drop in employment. In Canada, the 332,300 y/y loss in accommodation and food services employment alone accounted for 58% of our annual job loss. 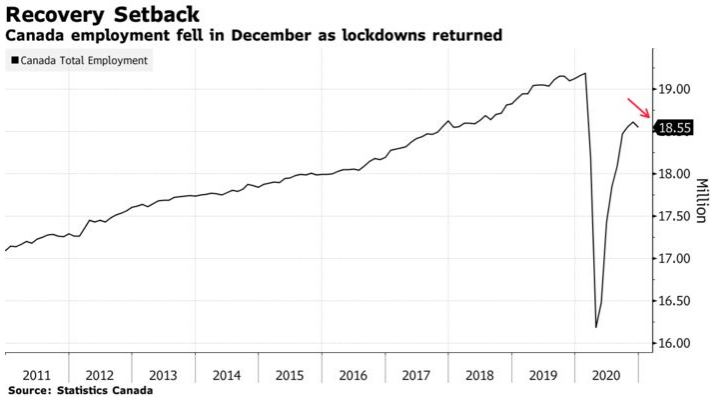 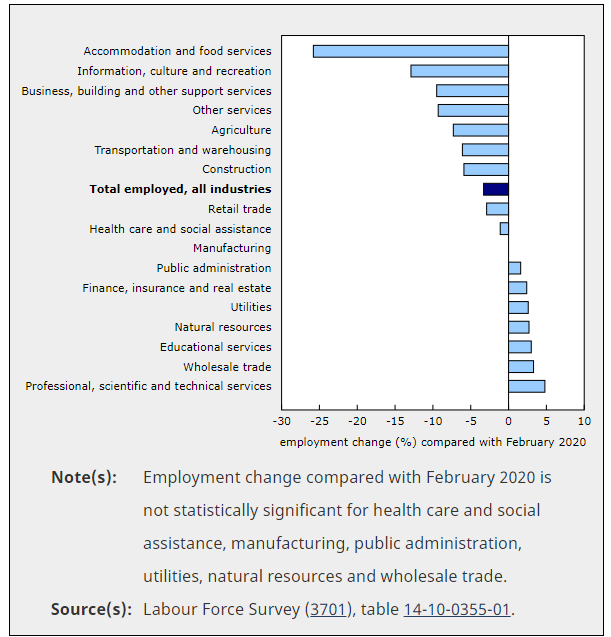 Employment was down in nine out of ten provinces last month. The lucky exception was British Columbia. None of the provinces stood out on the low side. The table below shows the unemployment rate by province. Jobless rates rise and fall with labour force participation rates. You are not considered unemployed if you are not seeking work. The number of people counted as either employed or unemployed dropped by 42,000 (-0.2%) in December, the first significant decline since April. Core-aged women and young males were largely responsible for the fall. 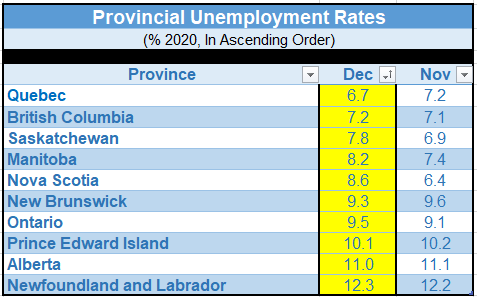 It certainly doesn’t appear that the lockdowns will be lifted anytime soon. We keep hitting new records in the number of Covid cases, and the more contagious Covid variant is upon us. What’s more, the rollout of the vaccine has been disturbingly slow. So until winter is behind us, there is unlikely to be a meaningful opening of the economy. All things considered, Canada’s economy has been relatively resilient. That’s not surprising given the government income support–the most generous in the G7 countries. Moreover, financial conditions are extremely accommodative.

Although no one is coming through the pandemic unscathed, most of the employment losses have been lower-paying jobs. Many higher-income earners continue to work from home. And even though the pandemic is worsening, many of Canada’s housing markets recorded their strongest December ever. Rock-bottom interest rates, high household savings and changing housing needs turned 2020 into a spectacular year for housing activity.

According to local real estate boards, December resales were surprisingly strong for what is typically a quiet month. Existing home sales surged between 32% y/y in Montreal, Ottawa and Edmonton and 65% y/y in Toronto based on early results. More distant suburbs attracted many families looking for more space with less concern about long commutes when jobs can be conducted at home. Property values continued to appreciate at accelerating rates in most markets. Downtown condo prices still bucked the trend due to ample inventories in Canada’s largest cities—the downturn in the rental market has prompted many condo investors to sell. That said, softer condo prices are now drawing more buyers in. Existing condo sales soared virtually everywhere in December.

Housing is likely to continue to cushion the blow of the pandemic on the overall economy. And while not everyone is sharing in this windfall, it will ultimately help pave the way to better employment gains in the spring.

However, no question that the bright light at the end of the very dark pandemic tunnel is a widely dispersed vaccine. PM Trudeau reasserted this week that the vaccine will be available to all who want it by September 2021. At the pace, it is now getting into people’s arms, that will not happen. Just over 0.6% of Canada’s population was vaccinated as of Thursday, January 7. By comparison, the US had vaccinated 1.8% of its population by that date, and Israel had inoculated nearly 20%, according to Our World in Data, a nonprofit research project at the University of Oxford. The U.K. had vaccinated about 1.9% of its population by Jan. 3, the latest date for which vaccination numbers were available (see the chart below). 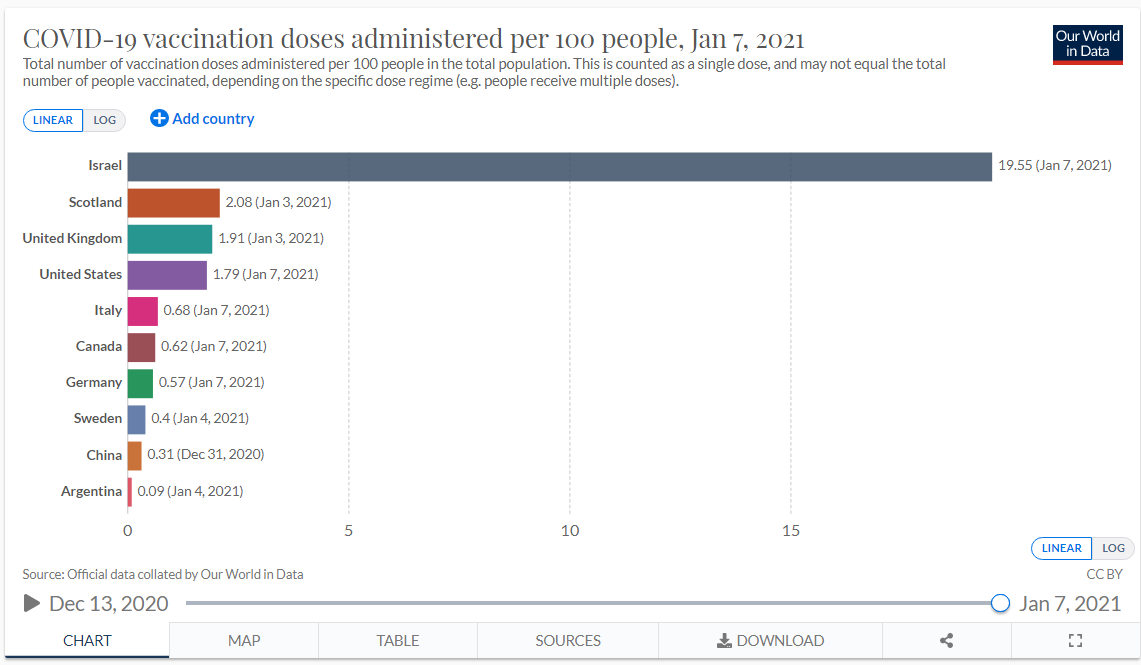